Almost all of us have heard about one of the Seven Wonders of the World –The Great Wall of China. But, a few are aware of which comes the second. It might come across as news, but the second-largest wall is built in India, in the state of Rajasthan. And the Kumbhalgarh Fort in Rajasthan has the 2nd largest wall of the world, encasing the fort with its guarding arms.

The Kumbhalgarh Fort is nestled towards the north of Udaipur at a distance of 80 km amidst the wilderness and authentic beauty of serene nature. After the fort of Chittorgarh, the Kumbhalgarh fort ranks second in being the largest fort in Rajasthan; yet the walls of the 2nd largest fort in Rajasthan extend up to 36 km making it the world’s second-largest wall. The wall of Kumbhalgarh Fort is touted as the “The Great Wall of India.” The Aravalli ranges cradle the fortress, which was infamous for being the birthplace of King Maharana Pratap, who was the legendary king of Mewar. In the year 2013, UNESCO declared the Kumbhalgarh Fort as a World Heritage Site.

How to get around the fort of Kumbhalgarh?

You cannot take any vehicle past the entrance gate of Kumbhalgarh Fort, so you have got just one option for the entire area. And that is by walking around the area with your feet, it sounds exhausting we understand, but it is worth it. There are a few attractions that are located close to the entry gate, which you can visit with 2 hours of time. However, to have a look at the entire area of Kumbhalgarh Fort, it’s going to take more than 6-7 hours of your time. For a weekend getaway, Kumbhalgarh Fort is one of the most exciting places that you would want to visit. 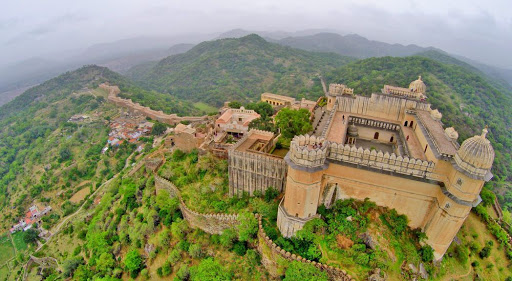 When you are planning on visiting the fort of Kumbhalgarh, we would suggest you went by road through a bike because you will enjoy the picturesque view of the location throughout your way to the fort. The place with historical importance is surrounded with lush green mountain ranges of the Aravalli, giving you a panoramic view in your vicinity to take in.

The picturesque view of the 2nd largest wall in the World

Well, it is not only the fact that the Kumbhalgarh Fort wall is 2nd largest in the world is fascinating, but the picturesque and breathtaking view the entire area has to offer to its visitors. The fort is fabricated on the foothills of Aravalli ranges, which is further encircled by thirteen other peaks that make the view awe-struck. 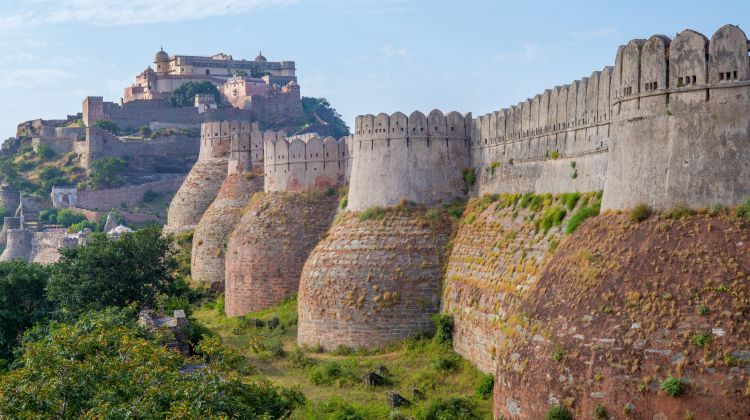 What adds up to the beauty of the entire location of the fort is –the golden sand of the Thar Desert! The Kumbhalgarh fort was designed with keeping such architectural beauty in mind that it often shocks the beholder about the creativity of the artist.

The Fort has seven massive gates and seven ramparts that are constructed one within another. The Ramparts are further reinforced with the gigantic watchtowers and the curved bastions. The main entry gate to the Kumbhalgarh fort is referred to as Ram Pol. Some of the buildings of importance within the magnificent citadel are Shiva temple, Badal Mahal, Neelkanth Mahadeo Temple, Mammadev Temple, and Vedi Temple. The entire fort of Kumbhalgarh is lined by more than 360 temples, out of which 300 are dedicated to the Jain religion.

Kumbhalgarh Fort is situated 80 km away from Udaipur, in the Rajasmand district of Rajasthan. The fort is regularly visited by people wanting to go for a day’s excursion from Udaipur. As a matter of fact, Udaipur city is well connected to some of the major cities in India, which makes reaching Kumbhalgarh Fort a smooth trip.

You can make use of various means to reach Kumbhalgarh Fort to have a look at the 2nd largest wall in the world and other added beauties surrounding the complex.

Nearest Railway Station: The nearest railway station situated near Kumbhalgarh Fort is the Falna Railway Station, which 84 km away from the location. It is connected to almost all the major cities of the country.

Nearest Airport: The nearest airport to visit the 2nd largest wall of the world in Kumbhalgarh fort is the Udaipur Airport, which is roughly 2 hours away from a ride from the destination.

Although the Great Wall of India is the primary reason why the Kumbhalgarh fort attracts so many visitors, what keeps them coming is the view that the place has to offer. The wall stretches beyond 36 km and has a width of 15 m, which is broad enough to adjust more than eight horses when stood, adjacently. The entire wall is built with bricks and passes through the Aravalli ranges. So what are you waiting for take a visit to one of the most beautiful places that Rajasthan has to offer!