Did you ever hear about the smallest inhabited River Island? To be proud of, India is the only country blessed with this beautiful smallest river-based Island. Located on the gigantic Brahmaputra River is the beautiful island of Umananda, which is located not too far from Guwahati City.

The Umananda Island is the smallest River Island perched on the River Brahmaputra moving along the city of Guwahati, Assam. It is also known as Peacock Island, which was named by the British in view of its shape. 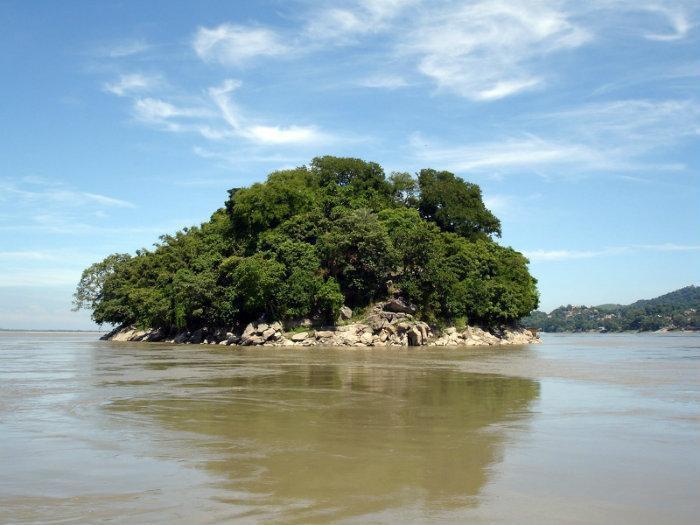 The island of Umananda is famous for its Shiva temple. As it is located in the centre of the River Brahmaputra, one has to take a ferry ride from Kacheri Ghat or Umananda Ghat on the mainland to reach the divine temple of Lord Shiva.

According to the mythology stories, Lord Shiva lived here to the joy of his wife Parvati, also called as Uma. Hence, this Island got the name Umananda.  There is also a story written in Kalika Purana (Hindu religious text). It is said that Kamdev, the god of love, was burned to ashes by Lord Shiva with his third eye in this place because he interrupted Lord Shiva while he was meditating. Hence, this island got another name as Bhasmachal (Bhasma means ashes and achal means hill, the actual meaning is hill of ashes). Besides, this place is also known as Urvashi Island. It is believed that Urvashi, the celestial damsel gets nectar for the pleasure of Kamakhya (giver of desires).

Places to visit around Umananda Island

Umadevi temple is a must visit here. It was built by Ahom king of Assam in the 16th century. It is believed to be a place of high religious significance.

For a foodie, who likes to try different cuisines, one can try local Assamese cuisine. Some of the mouth watering dishes include Khar, Aloo Pitika, Ou Khatta, Maasor Tenga, Xaak aru bhaji, Pitha and Tenga. Not only you will get to try delectable cuisine, but you will learn a thing or two about their culinary style.

One can visit this place from October to May. The weather during winters is usually pleasant with the need of woollen clothes, especially during night hours. Post- February, the temperature see a rise but still comfortable. Summers here are quite hot as well as moist. Avoid visiting this place during monsoons.  Due to the rise in water levels of the River Brahmaputra and flash floods, entry to this island can be denied.

If you are interested in offering prayers then the most effective time for you to visit is during Maha Shivratri and Shiva Chaturdasi. Overall the best time to visit this location is during winters.

Mahashivratri is considered extremely auspicious here. It is the most popular Hindu festival celebrated here in this Island. Monday is considered the holiest day. Worshipping here on the new moon day especially which falls on Monday is believed to bring the highest bliss.

How to reach Umananda Island?

To visit the Island, one has to cross the river by ferry. These boat services are available from morning 7 am till evening 5 pm. It takes around 10 to 15 minutes to reach the Peacock Island. The ferry boat services can be hired from sukhleshwar ghat or fancy bazaar ghat.

One can leave around 8 am to Kachari Ghat to reach the Island. After visiting the divine Umadevi temple, spend some time walking around the Island to feel the calmness of the place. Leave around noon to Guwahati.

Plan your visit to this amazing island and fall in love once again with nature at Umananda. This place is best for nature lovers and the people who loved to live amid the seclusion and serenity of Mother Nature. After a long struggling week at the work place, the banks of Brahmaputra River get you going with refilled energy.