It has always been a custom in the Hindu tradition to offer food as “Prasad” to God as gratitude. The Prasad is usually in the form of special tradition food and it is believed that each deity has a different taste for different food items. There is always a favorite dish that is associated with the respective God. This ritual of offering the preferred food has taken a deviation, touched by modernity in the temple of Chemmukathu Sree Subramaniya Swami at Alappuzha. The deity of the temple Balamurugan is fond of chocolate named “Munch”. That’s right. He has hence now been renamed as the Munch Murugan, the Lord who loves Nestle’s Munch.

The tale of the Munch

The story of Munch Murugan started a couple of years back. As a joyous kid, a Muslim kid ran around the premises of the temple and hit every bell to ring for fun. He was rebuked for his behavior by his parents. The kid was got sick the same evening and kept enchanting the name of Bala Murugan. Worried by the condition, his parents went back to the temple the very next day and offered what was usually served to the Lord, flowers, sandal paste, incense stick, and oil. 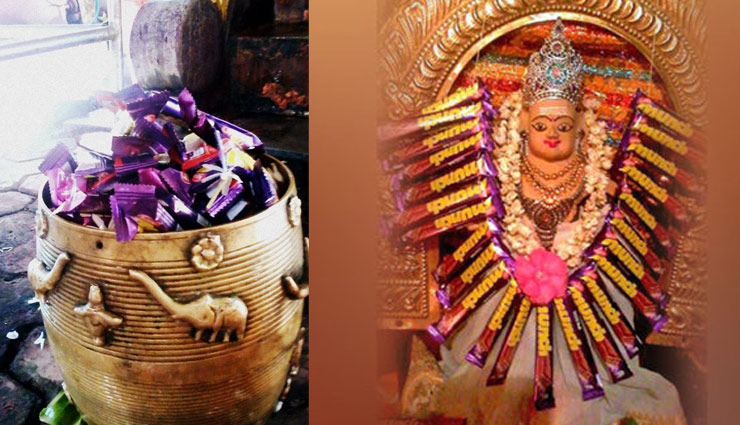 The kid refused to give anything away but Munch. While doing so, his condition improved miraculously and he was completely cured. The word of mouth spread like flames of the fire. Since that incident, the locals and tourists offer Nestle’s Munch to the Lord Balamurugan. It has now been kept as a tradition.

The Tradition at Munch Murugan

The tradition or parampara of presenting Munch has now taken a totally unique form. The devotees from all around the world when coming to the Balamuruga Temple, bring kilograms of munch. This is filled in a large bowl whose volume can support about 8 kilos of rice. Unlike flowers and coconut being served in any other temple, the Prasad has a new and the most chosen menu here. There are some devotees who have donated Munch as much as the weight of the body too. Fascinating isn’t it? The temple is often visited by kids and college students who too offer Munch to Munch Murugan to be blessed. There is no single child who returns disappointed from this place. 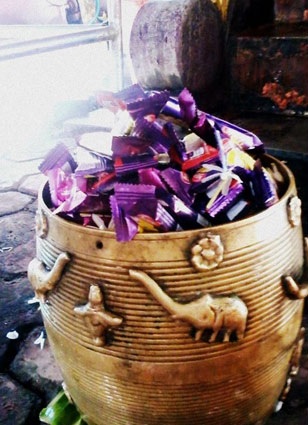 Irrespective of religion, gender, caste, creed, and color, the temple is open for all who wish to seek blessings from Lord Balamurugan. This is the beauty of the 300 year-old temple. It is a pleasure to watch the kids’ innocence when they come to pray with chocolates in the hands. Both the Lord and the kids are fond of each other and the connecting link between them being chocolates.

The trend of Tourism

The temple is about 300-years-old. Well maintained, the temple is dedicated to the son of Lord Shiva, the master of the Universe. The unique temple is being visited by thousands of tourists every day. They too offer what is loved by the Lord. Kerela proclaims itself as God’s own country and is totally true to the word. But the idiosyncratic and rare concept of this particular temple has inculcated a serious interest amongst the visitors to visit the ThekkanPalani Temple or DakshinaPalani of Alappuzha.

The Glory of the Temple

Despite being an age-old temple, the premises are well maintained. The exteriors, as well as the interiors, are in good condition. The intricacy of the art and architecture can be seen clearly. The fine details on the walls of the temple are mesmerizing.

The flooding of Chocolates

With the increase in the number of visitors to the temple premises, the offerings have also upscaled. Thousands of tourists visit the temple every day and bring chocolates as Prasad for the Baby Murugan. Earlier it was mostly the kids who used to bring chocolates with them but now it is the adults too who seem to have joined the race. The management of the temple found it difficult to handle the overflow of the chocolates but now they have come up with a solution. They return the Prasadam along with the devotee after the offering is made along with sandal paste and flowers. The authorities would like to have cash in the donation box instead of Munch for the development of the temple and its surroundings.

One can take a trip to Cochin from where Alappuzha is only at an hour’s drive. Once in Alappuzha, one can get many state-run transport corporation buses and cabs to the famous temple. Local buses are also available in hand in every 5 minutes. You can also opt for a self-drive. The temple route is easily available on the maps.

Out of the 33 crore deities of Hindu mythology, BalaMurugan of Alappuzha is the most special one. It is definitely the distinctive taste of the God that has made him so special amongst the devotees.