You must have made out from the name by now, that this park floats over the water. However, this national park floats over the Loktak Lake of Manipur. Spread over an area of 40 sq.km, Keibul Lamjao National park is situated in the Bishnupur district. Also, this lake has been titled as the largest freshwater lake present on the eastern side of the country.

The major attraction for photographers and travelers is “Phumdis.” Basically, they are dead and decayed flora, floating over the surface of the water. Grasses and tall reeds of 15 ft. high can be seen growing above these phumdis. Many tourists from in and outside India flock into this region to witness the awe-inspiring beauty.

A dancing deer called Sangai is the showstopper when it comes to wildlife in the national park. With its floating posture and light movements, the deer seems to be dancing, hence, its title as the “Dancing deer.” Let us tell you that it’s a very rare species of which the other two are seen in China and Myanmar. What’s interesting is, in 1951, it was declared that the dancing deer is extinct. However, after a year, it was re-discovered which exists until today.

From mammals and amphibians to fishes and reptiles, every species of fauna can be found here. The sight of these rare wild animals shouldn’t be missed at any cost along with sambhar, Indian python, and black bear. Endangered species such as the Himalayan bear can be found here. A visit to Keibul Lamjao is worth it as it offers a glimpse of numerous species living undisturbed in the natural habitat. While you are here, make sure to be alert or else you might miss the view of an extremely rare animal.

Who could have thought a rare winter migrant Waterfowl visit here? Well, yes. Now you can see this bird hovering around in the sky above the Keibul Lamjao.

The story behind its establishment

The whole reason behind the establishment of this area as a national park lies behind the extinction and re-discovering of the “dancing deer” or “Sangai.” As mentioned above, this species of deer was declared extinct in the year 1951. Immediately after that year, Sangai was re-discovered by an environmentalist & photographer at the Keibul Lamjao park. With an aim to conserve and protect the only living species, the park was converted to a national park. 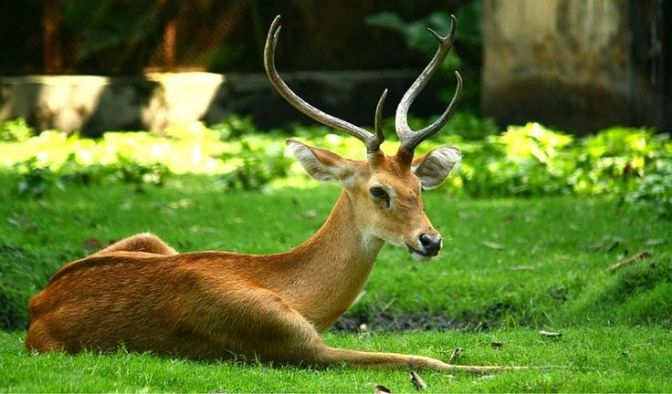 Since then, the Sangai deer has been a pride of their culture and folklore of Manipur. This is why it has been made by the state animal. In 1975, the population of Sangai was only 14. Eventually, this population increased throughout the 1970s and 1990s, making it 155. A recent study conducted in the year 2016 revealed that their population now stands at 260. Can you find a national park with 400 animal species, 233 aquatic plants, and about 100 bird species? We don’t think so.

Away from the hustle and bustle of the city, one can spend their weekend at peace amidst the serene, calm, and soothing environment of the Keibul National Park. You might leave Keibul, but it does not leave you. Apart from the rich wildlife, the Keibul Lamjao also is a habitat to 233 varieties of aquatic plants. One can say this park has rich vegetation as it includes herbs, grass, and flowers.

Some of the rarely found lilies act as a cherry on top of a cake. A terrestrial lily found nowhere across the world is seen enhancing the beauty of this park. Khoimom, Alpinia galangal, Cynodondactylon, Dioscoreabulbifera, etc. adorn the phumids present in the park. Indeed, this place seems quite rich in vegetation and bio-diversity.

Bishnupur can be approached either by private vehicle or bus as it’s connected to various cities through the road network. Government, as well as private buses, flock to the district frequently.

Nearest Railway station: If you want to travel by rail, the nearest railway station to the Keibul Lamjao will be Dimapur Railway Station. Buses and cabs frequently take tourists to Bishnupur. Hire one to cover the distance.

Nearest Airport: You can reach Keibul Lamjao by boarding a flight as Imphal has an airport, which is some 32 km away from the Bishnupur. Imphal is well-connected with major cities such as New Delhi and Kolkata.

With our rapidly developing country, the natural habitat of birds and animals are being destroyed. There’s nowhere to go when one gets frustrated by the chaos of the city. If you want to be near the Mother nature and embrace its beauty, its high time you should take a tour across the Keibul Lamjao National Park. Witness some of the endangered species along with the picturesque landscape.