In the capital city of Jammu and Kashmir –Srinagar, one of the most famous lakes is nestled. The Dal Lake in Srinagar is not only known for its cleanliness but also because of featuring some of the fascinating views in the country. On the world-famous Lake of Srinagar, India’s first and only floating post office is established. That serves as a captivating tourist spot for the visitors to have a look at.

The Floating Post Office came into existence in the year 2011 and was inaugurated by the ex-Chief Minister Omar Abdullah. Since the day of its inauguration, the intriguing, floating post office has been attracting the attention of tourists from all across the country. The floating post office on Dal Lake is not just a boon for the state’s tourism but also regarded as a tribute given to the exquisite lake of Srinagar.

The houseboat boasting the post office also consists of a philately museum along with a shop that sells postage stamps and various other souvenirs, which you would love to buy. The list of items that you can find in the shop includes –greeting cards, picture postcards, stationery items, local items, and several books that are based on Kashmir. The post office also extends its services for tourists to enable them to email or call their friends from all across the world. 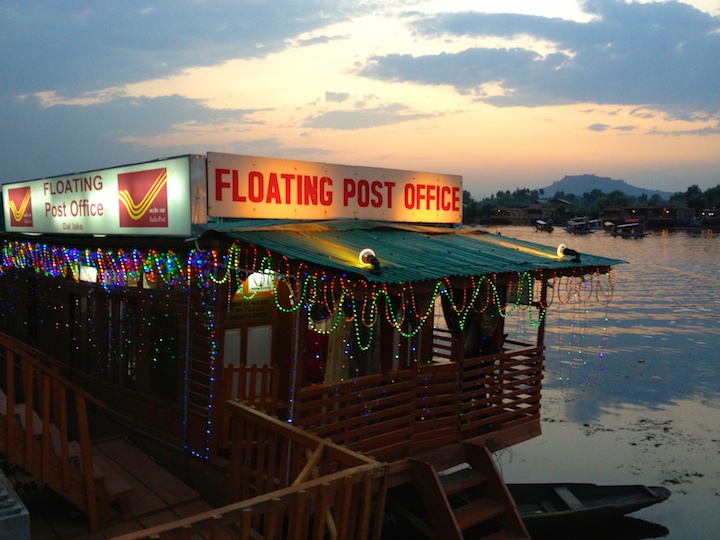 One of the most adorable features of this post office is –all the letters that are posted here will carry an exclusive design with a panoramic view of the scintillating landscape of Srinagar, the Dal Lake, and other famous tourist location in the capital city of the state. In the museum of the post office, you can come and have a look at the history of the place and some of the fascinating postage stamps that are for display. The Dal Lake comprises of the houseboats and the world-famous shikaras with the snow-clad mountain ranges as its backdrop. The floating post office just adds up to the beauty of the entire area.

Although the floating post office on Dal Lake has two small rooms out of which one is dedicated to the official works, the other serves the purpose of the Philatelic museum containing the history of the postal department of the state. However, for the locals of Srinagar, the floating post office is way more than just fascination. More than 1-2 crore worth money is deposited here every month received from the communities that surround the Dal Lake. Dal Lake has several islets, which serves the purpose of abode to more than 50,000 people. 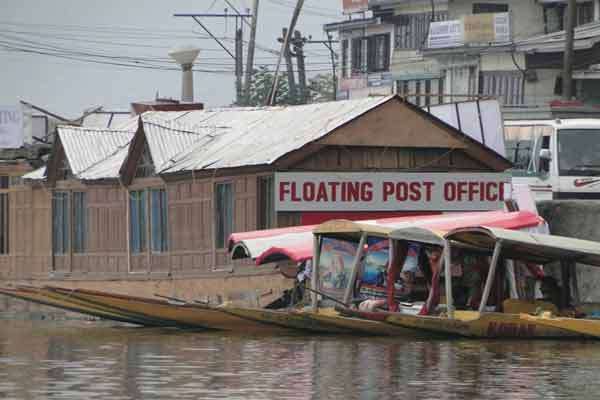 The Post office built on Dal Lake has witnessed dreadful times; one of the incidents is the flood of 2014. The houseboat was pushed uncontrollably by the flood and had gone for a toss. Later, the rescue team had to jump in and anchor the floating office by making use of a special mechanism to a nearby island. Then it was brought back to the Dal Lake, once the water receded. The biggest boon for the people working at the post office is they do not need to use a fan at any time of the year. The weather is pleasant and refreshing, which makes it an unmatched working experience.

The floating post office is situated on the Dal Lake of Srinagar, which boasts pleasant weather conditions having a soothing temperature throughout the year. But, we would suggest you planned your trip from April to October that is because the summers here could be bearable and mesmerizing while the rest of the country is heating up. Yet during the winters, the cold is almost freezing. Therefore, to have a pleasant experience in the city, plan your trip accordingly.

Among various other tourist destinations, Srinagar boasts a floating post office, which you must have a look at whenever you are visiting the city.

Nearest Airport: The Jolly Grant Airport is the nearest Airport to Srinagar, located at a distance of 125 km from the city. It is well connected with motorable roads.

Now that you are aware of the fascination that awaits you at Srinagar, what are you waiting for? Book those tickets, pack your bags, and off you go to Srinagar to have a look at the amazement all by yourself. Also, don’t forget to post letters for your friends and relatives from the floating post office!