Since its establishment in 993 CE, Gommateshwara Statue has been serving as the world’s largest monolithic statue. Also known as Bahubali statue, it has been built in honor of Lord Bahubali. No, we aren’t talking about the movie Bahubali here. Here, we’re talking about a Jain lord who had strong arms with an amazing story of Karnataka. What makes this statue so unique is that it is the largest monolithic statue in the world, i.e., it has been carved from a single granite block.

As it is as high as 60 feet, one can notice it even from a distance of thirty kilometers. All the Jain from all across the country flock to this destination as it’s a famous pilgrimage site.

The story of the statue

A minister and poet of the Western Ganga dynasty called Chamundaraya is the man behind the construction of this huge structure. Built between 993 CE and 978 CE, it serves as a major pilgrimage site for Jains until today. You must have read about Tirthankara in school, right? If you haven’t let us tell you that Tirthankaras are mainly teachers of Jainism who guide men and women. Bahubali was a prince, born to one of the Tirthankara named Lord Adinath of the Ikshvaku dynasty. Following a war with his brother, he set out for renunciation.

The great Bahubali meditated for about one year in a standing posture. This led to the growth of vines all over his legs without his knowledge. In the latter part of the year, he was successful in attaining omniscience or Kevala Jnana. To celebrate his devotion, determination, and success, this Gommateshwara statue was sculpted at Shravanabelagola.

By the 60 feet tall Bahubali statue, Mahamastakabhisheka is performed once in every 12 years. The presence of hundreds and thousands of national &international visitors turn the town into a swarming place. Since Lord Bahubali is the first-ever Tirthankara to attain salvation, he is very highly revered. Mahamastakabhisheka is the head anointing festival, which is an ancient and essential part of Jain tradition. 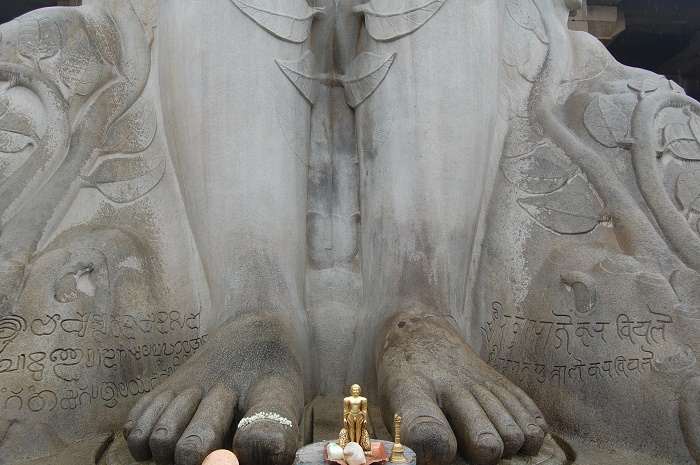 The festival starts with the pouring of 1008 caskets of water, and then it is consecrated with a blend of milk, saffron, and sugarcane juice. After that, the gigantic statue is covered by sprinkling vermillion, flower petals, sandalwood powder along with turmeric powder. Often devotees can be seen offering valuable coins and stones made out of gold and silver.

Inside the temple complex

Shravanabelagola is surrounded by two hills, Vindhyagiri and Chandragiri. Vindhyagiri is the hill, over which the great Gommateshwara statue stands whereas, the Chandragiri hill houses various memorials, temples, and an amazing view of the statue. By just climbing a few steps, which will not take more than twenty minutes, you will be able to witness the mighty structure. 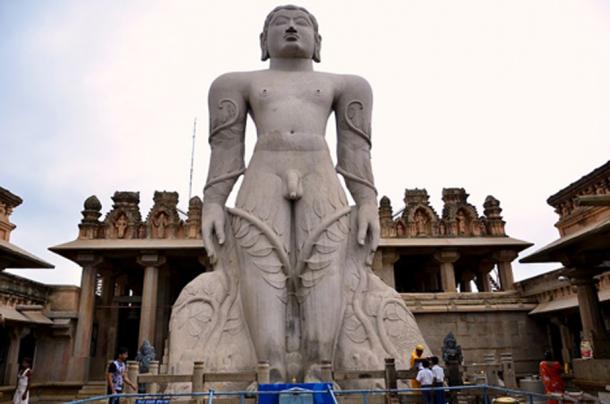 Also, to help physically challenged people, the temple council provides palanquin service, which will carry them to the top. The higher you go, the better the view gets. When you pause to catch a breath while climbing the stairs, you will notice richly carved sculptures, inscriptions, and statues.

After you step into the temple complex, take a walk around the clockwise direction, and you’ll be at the feet of Lord Bahubali. If you want to fetch more information, hire a guide who will make you aware of the Bahubali’s anatomy right from his arms to his toes. Around 24 statues of other Jain Tirthankara surrounds the main figure.

About the mighty Gommateshwara statue

Lord Bahubali’s statue faces north and is made to stand in a meditation portion called Kayotsarga. This pose, along with self-resistant and renunciation, was particularly used by Tirthankaras to get salvation. In Jain tradition, the Digambara pose symbolizes victory over materialistic desires and attachments, which acts as a barrier between a person and divinity. The structure of the face is curly hair, huge elongates ears, eyes open, and perfectly chiseled attributes. 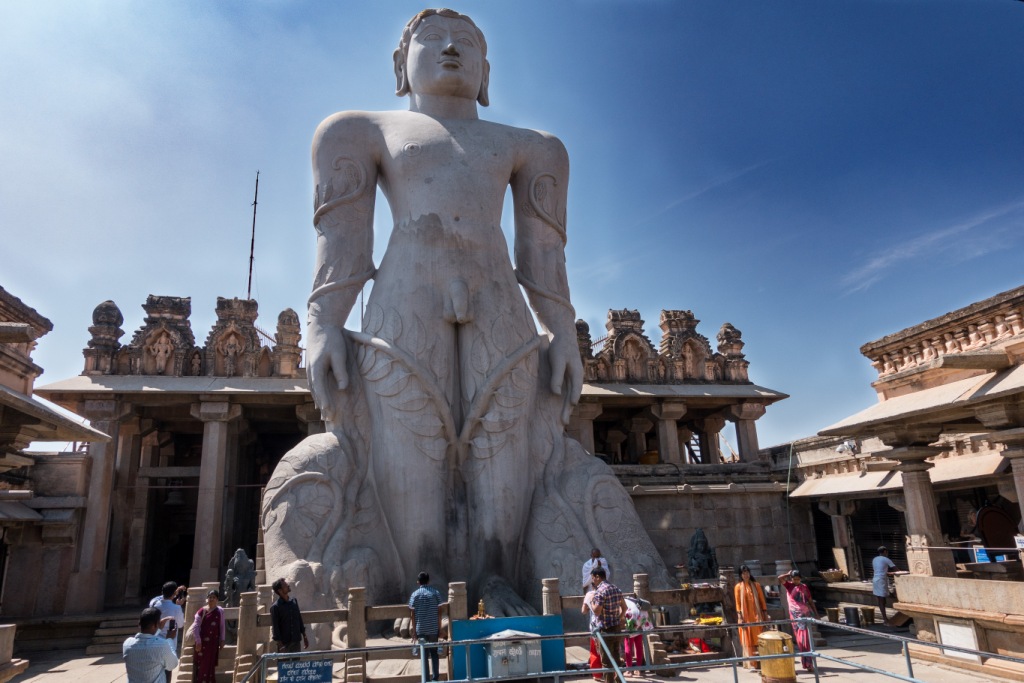 Since it is a major pilgrimage destination, the transportation system is not a problem here. The town is flooded with both government and private busses.

Nearest Airport: Bengaluru International Airport is the nearest airport to the Gomateshwara statue. As it’s just 4 and a half kilometers away, one can reach their destination by public transportation.

No matter whether you are a Jain, atheist, or a simple traveler, you must pay a visit to this place at least once. While you are here, don’t forget to appreciate the beautifully sculpted inscriptions and other structures around the temp