Everyone knows that the hands of the workers who built the Taj Mahal were maimed to prevent them from building another beauty like the Taj Mahal. Despite this harsh decision, there exists a replica of the Taj at Aurangabad. Did you know that? Well, that replica is named as Bibi Ka Maqbara. Builtin the year 1678 (few years after the Taj Mahal was built), it was a memoir of Prince Azam Khan’s mother.

Just like the Taj Mahal, Bibi ka Maqbara was built for love. However, in this case, the structure was the epitome of the unconditional love of a husband for his wife and a son for his mother. Now you must be wondering what does the Maqbara signify? Well, Maqbaras are graves or qabars which were famous during the Mughal rule.

The death of Dilras Banu Begum, wife of Aurangzeb & the mother of Prince Azam Khan, led to the establishment of this beauty. After the death of his mother, Prince Azam set out on the path for establishing a memoir just like his grandfather, Shah Jahan, did for his beloved wife, Mumtaz Begum. He wanted the beauty of his mother’s memoir to succeed in the beauty of the Taj Mahal. 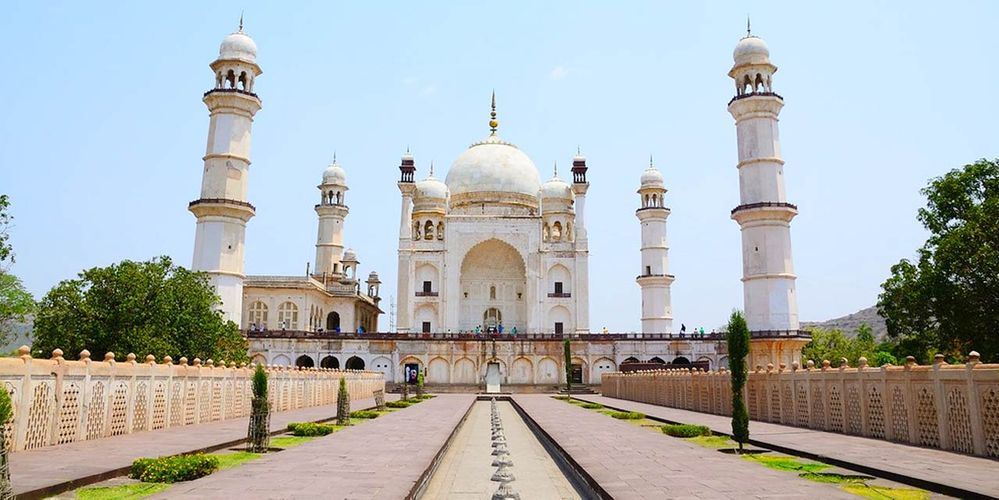 However, he did not have access to skilled workers and, most importantly, treasury like his grandfather had. Even though he did not have the optimum sources, he managed to build the “Bibi Ka Maqbara,” which somewhat replicates the Taj Mahal. Ata Ullah, the son of Ustad Ahmad Lahauri (the mastermind behind Taj Mahal’s construction), was commissioned for the process of construction. All the patterns and designs etched into it reflect Mughal architecture. Just because it could not replicate the Taj Mahal’s beauty completely, doesn’t mean the love and respect behind the construction is anything less.

Description of the site

Great detailing, architectural style, and structure information add up to the grandness of “Bibi ka Muqbara.” Encircled by a beautiful garden, the structure stands high over a square platform. Minarets have been installed at the four cardinal points. When it comes to resembling the patterns and designs of the Taj Mahal, it is indeed a success. The whole format has been imitated at “Bibi Ka Maqdara” except the window and ceiling, which are pretty much different from The Taj. 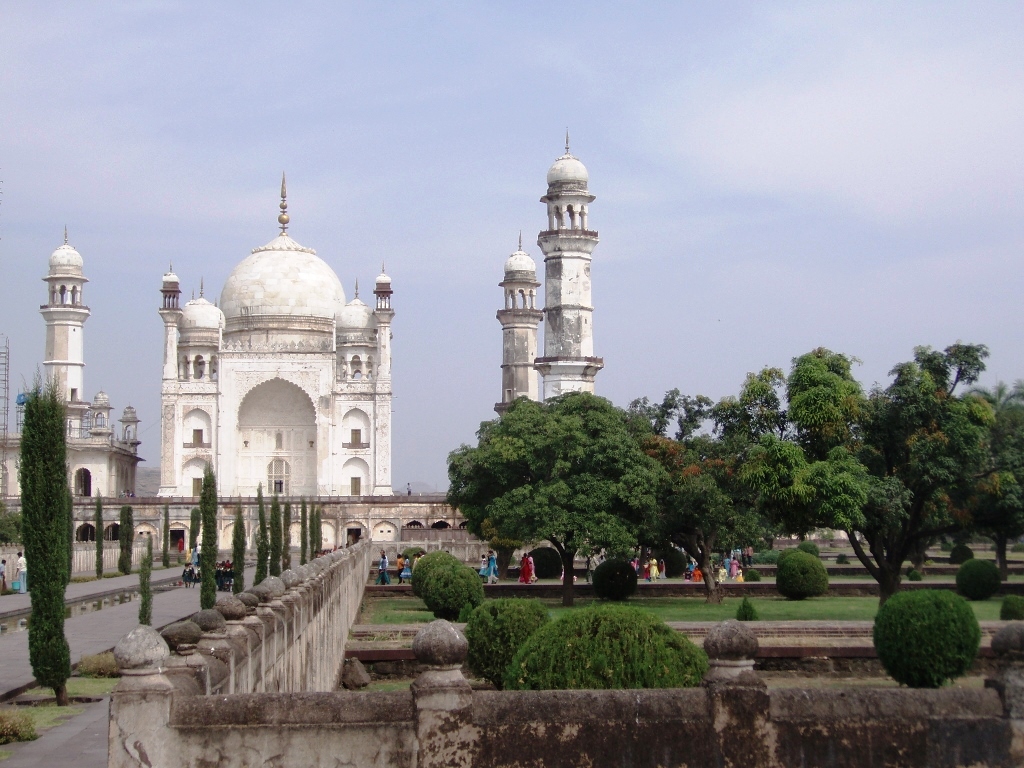 If crowded places are not your thing, then this place is the best fit for you. Why? Well, you can explore the same beauty, excluding the crowd. Spend time with your family amidst the beautiful and peaceful environment of the garden. Did you know gardens were the most important in a Mughal household? Yes, it is. As it is an age-old tradition to set out the garden using the Char Bagh design, the garden at Bibi Ka Maqbar followed the same.

Difference between the Original structure and the Replica

Though there are many similarities between the two richly carved structures, there still lies some exception that separates the original from the replica. While the great “Taj Mahal” consumed around 3 crore rupees, the “Bibi ka Maqbara” had a budget of 68 lakhs only. One of the most noticeable differences lies in the color of the structure. Taj Mahal is made from completely white marble, whereas, in Bibi Ka Maqbara, a blend of plaster, limestone, and marble is used. Here, only the central dome is made out of marble. 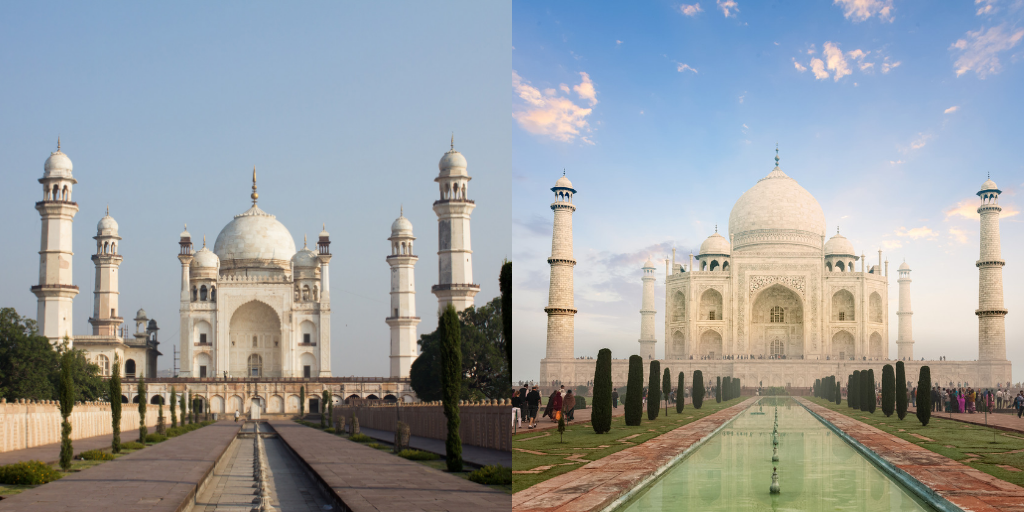 Another major difference is, while the Taj Mahal’s shape is octagonal, the Bibi ka Maqbara’s shape is square. You must be wondering there’s just a difference in shapes. However, this isn’t the case. Everything related to both structures conveys some meaning. The octagonal shape of the Taj Mahal is termed as auspicious, which invites good luck. On the other hand, Bibi Ka Maqbara has got the entire complex divided into 8 platforms.

Local buses and auto-rickshaws flock through the city. You can hire one to move around and reach the authentic structure. If you are a tourist, you can make a prior booking with tourist agencies.

Nearest Railway station: The Aurangabad Railway Station is connected to most of the major cities, which makes it easier for tourists to reach their destination. Either you can take a bus, hire a cab/taxi/auto-rickshaw to reach Bibi Ka Maqbara.

Nearest Airport: One can board a flight directly to Aurangabad as it has an airport called Aurangabad Airport. The distance between the airport and the stunning structure is somewhat 11 km. Take a local bus or hire a cab to cover the distance.

There’s no reason why you shouldn’t visit this place. If the Mughal empire fascinates you, then do not miss out on the charm of Bibi Ka Maqbara. The art, patterns, and design are worth appreciating. Also, it provides an insight into the thinking and household of the Mughal Empire. So, what are you waiting for? Book your tickets right away!