Auroville is a town with the purpose of ensuring peace and encourage progressive harmony among its citizen. To understand the level of human unity, Auroville, as a town, has been brought up. Auroville is the universal township in the making, which would be able to accommodate 50,000 people from all across the globe. It is located towards the north of Pondicherry at a 6 km distance. This town was a vision of ‘The Mother’ presiding in the Shri Aurobindo Ashram in Pondicherry.

The concept behind the establishment of Auroville as a town was to create an ideal township, which shall be entirely dedicated to the experiment of testing human unity. The city is basically the brainchild of The Mother, and she had this idea in the early 1930s. Somewhat during the 1960s, the concept was finally given a shape and developed before it was presented to the Government of India. 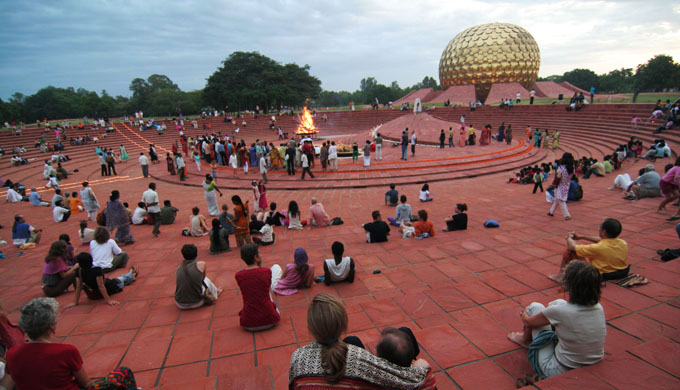 The Government gladly backed up the idea, and the concept was further forwarded to the General Assembly of UNESCO. A unanimous resolution was passed by UNESCO in 1966, commending Auroville as the project that preserves the future of humanity and thus should be given ample importance, which further led to the fabrication of this small yet so unique town –Auroville.

The purpose of bringing Auroville up was to test the level of human unity even in the presence of diversity. In today’s scenario, Auroville is the only town or space that is recognized as the first internationally endorsed experiment with an ongoing process that is being conducted on human unity, and the transformation of human consciousness. Auroville is also concerned with the practical researching on sustainable lifestyle and way of living, including the future environmental, cultural, spiritual, and social needs of humanity.

Auroville was inaugurated on the 28th of February, 1968, when more than 5000 people gathered near a banyan tree, which was regarded as the center of the future township to attend the inauguration ceremony. The inauguration ceremony was attended by the representatives coming from different states of India and 124 nations from across the globe.

The ceremony was remarkable as the representatives brought along with them a small portion of soil from their homeland or the country that they were representing, which was later mixed with the white marble-clad urn turned into the shape of a Lotus flower. The urn is now situated at the focal point of where the amphitheater is built. The ceremony was held at the same time when The Mother gave 4-point Charter to Auroville.

The meaning behind the word Auroville is –The City of Dawn. The vision behind finding Auroville as a town was to see how human beings can live together without being affected by the caste, creed, color, and even nationality. The significance of conducting an inaugural ceremony with representatives from all across the world was to denote unity in diversity, and that was the ultimate idea behind the fabrication of such a town or place. The lotus urn that sits in front of the amphitheater today in Auroville signifies the establishment of a city, which is entirely devoted to understanding peace and proceeding towards a brighter future for human beings.

Matri Mandir in Auroville is referred to as the “The Soul of Auroville,” which is situated in the center of the city. The Matri Mandir is basically a flattened sphere, which consists of the ‘Inner Room’ just as envisaged by The Mother. The room in Matri Mandir is used for practicing concentration and testing the power of the human mind to unlock the ‘real self’ or to achieve a higher sense of consciousness. The hall consists of the largest single crystal globe, and rest everything around is just white space. 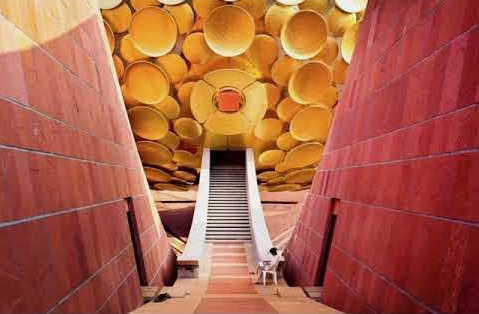 Inside the Matri Mandir, you can find no music, no flowers, or incense of any sort. That is because the Mother never believed in the fallacies of the world, and neither the room represents any sort of temple where idol-worshipping shall be practiced. Anyone can sit anywhere they wish to in the room to practice complete silence in the form of meditation. The visitors to Auroville will have to obtain a pass to get access to the room, which is free of cost but is open to the visitors during specific hours of the day. The Matri Mandir is a major attraction of Auroville and is surrounded by different zones.

Overview of the Plan of Auroville

The center of Auroville Township is marked as the Peace Area, which comprises of the Matri Mandir and the gardens of the Mandir. The peace area also consists of the amphitheater with the Lotus urn representing Human Unity comprising of the soils of 121 nations and 23 states of India. In the peace area, there is a project of lake constructed that helps in the creation of a calm and serene atmosphere and serves the purpose of groundwater recharge as well.

A 109-hectare area has been dedicated to the Industrial Zone in Auroville, which is located towards the north of the Peace Zone. The ultimate plan of Auroville Township is to create industrial aspects that are not far away from keeping nature in mind. Therefore, the industries here are entirely ‘green’ focussed on creating a self-sufficient and self-supporting township. It contains only the small to medium scale industries, arts and crafts center, city’s administration center, and particular training centers as well.

Around 189 hectares of land is dedicated to the Residential Zone, which is sufficiently bordered by parks on the north, south, and west sides of the area. The primary access to the Residential Zone can be done through the crown road with the enhanced distribution of traffic through five radial streets, which will divide the zone into sectors with increased densities.

The ideology behind the establishment of the Industrial Zone is to provide well-adjusted habitat between collective and individual living as well. More than 55% of the area will be entirely dedicated to greenery, and 45% will be used for building surface, which is to create an essential urban-density balance between modernization and nature.

The International Zone is built within 74 hectares of land to the west of the Peace Area, which shall be used to host the cultural and national pavilions, which will be grouped by continents. The initial idea behind such a contribution is to focus on creating a living demonstration of human unity even in diversity through genius expressions and the contributions made by different nations towards humanity.

The cultural zone is spread across 93-hectares of area, which is situated towards the east side of the Peace Zone, which is a site dedicated to artistic expression and for conducting research in education. The facilities for educational, cultural, sports activities, and art will be held in this cultural zone.

The city area with a 1.25 km radius is going to be surrounded by the Green Belt. This zone is going to be wholly dedicated to organic farming, orchards, wildlife, and forest cultivating areas. The Green Belt will act as a barrier to the urban encroachment of life, providing a safe and variety of habitat for the wildlife to reproduce and serve the source of food, medicines, timber, etc. It will also be a place dedicated to recreation.

Currently, an area of about 405-hectares, though an incomplete project –the Green Belt in Auroville, stands tall as an example for a successful transformation of the wasteland into an eco-system with all its mirth and vibrancy. It has been further planned to be extended by 800 hectares, which will be turned into a remarkable area with water and soil conservation, environmental restoration, and groundwater recharge. It will serve the purpose of the lungs for the entire township, which will continue the healing process for the town, which was initiated decades ago.

Auroville is located in South India, primarily in the state of Tamil Nadu. However, some of its parts extend up to Puducherry that is a few kilometers away from the Coromandel Coast.

Whenever you are planning on visiting Auroville town, make sure to book a place to stay in the way ahead. For this, you will have to look into the details of accommodations offered by Auroville. The months from December to February are booked heavily in the town as it boasts cold and dry weather. The place is lovely, and the peace lovers should take time to take a visit to Auroville town once in their lifetime.